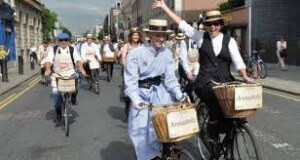 As I begin to write this blog, the sun is splitting the stones and Ireland is basked in sunshine. As a friend of mine who has recently emigrated to Australia has said, ”If Ireland had sunshine for even 2 months of the year, no one would ever leave” Let’s hope that the sun continues and you can have a great June in Dublin.

There are endless amounts of  events happening this month so  here is our guide to what’s on in June in Dublin . .

The Forbidden Fruit festival has been running for 6 years and is hugely popular among festival goers. It runs for 3 days starting on Saturday 3rd June  in the Royal Hospital in Kilmainham which is just a 10 minute tram ride away from Isaacs.

There will be artists such as Orbital , Booka shade and Bon Iver playing amongst many more. It’s sure to be a great weekend.

The annual Bloomsday Festival celebrations take place throughout Dublin during June and often include dressing up as characters from the novel and in clothes that would have been the style in that era. One of the hallmark fancy dress items often worn is the straw boater hat.

The Bloomsday Breakfast is a big tradition which involves eating the same breakfast as Leopold Bloom consumes on the morning of 16 June. This includes liver and kidneys alongside the typical ingredients of an Irish fried breakfast.

It’s a fantastic day and a great reason to learn about the famous James Joyce.

Big Gigs in Dublin in June

June is a busy month for big Concert names in Dublin in June  with Justin Bieber , Phil Collins , Robbie Williams Ricky Gervais , The 1975 , Arcade Fire , and Aerosmith  all scheduled . We wish you the luck of the Irish if you are still hunting down ticket  your chosen gig

Since the YES Vote in  LGBT marriage  referendum in 2015 this Dublin Pride festival has grown from strength to strength , you can be assured lots of colour and craic at this one , main parade kicks off at  from St. Stephen’s Green at 2pm  on 24th June but there are events happening all week

If you need a bit of retail therapy or a few gifts to take home then running from May – September throughout the summer is the Temple Bar Night market. Great arts and crafts are on show each Wednesday night  from 2pm-until 8pm

So there’s lots of variety to keep you amused in Dublin this June , failing that just ask the Isaacs crew and they will point you in the right direction

Top 3 things to do Dublin In March

Escape rooms in Dublin on a boat !