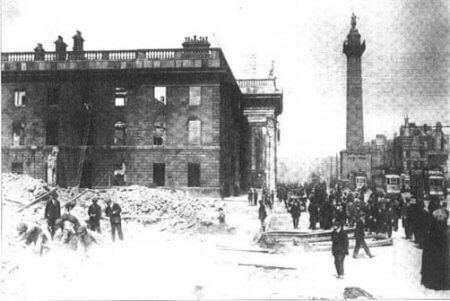 ‘’Andy, write a blog on the top reasons to visit Dublin in 2016.’’
‘’Eh, because it’s Dublin? We still have all the Guinness? The lads are all still playing the music right?”
So apparently, that doesn’t suffice. Needless to say though you don’t need a reason to come to Dublin. The nightlife, culture and beauty alone will be enough reason to come visit, but this year especially, there are some very good reasons why you should visit Dublin. Here are some of the top reasons to visit Dublin  2016, with Easter Rising commemorations taking centre stage this year.

g to Dublin in 2016? This year marks the one hundredth anniversary of arguably the most important time in Irish history and the most significant uprising on these shores when seven men proclaimed the establishment of the Irish Republic. Dublin was the main location for the uprising. The General Post Office on O’Connell Street (Sackville Street at the time) was where these seven men occupied themselves before the British police suppressed the Rising and eventually executed the seven signatories and nine of their compatriots. Although the rising failed to immediately bring independence to Ireland, the public outcry at the executions shifted opinion in the country and is ultimately known to have been the turning point in Ireland’s fight for independence.

If you come to Ireland this year it will definitely be worth your while engaging in some of the many tours available to you to learn a little about the rising and one of the main reasons us Irish have our independence today. You can take in some of the historic and beautiful sites where much of the rising was planned or fought out. The Easter weekend takes place on the last weekend in March although the events and exhibitions based on the events of 1916 will be ongoing throughout certainly the first 4 – 6 months of the year. Learn more about the Rising by taking the 1916 Freedom Tour.

reason to visit Dublin in 2016; Dublin will be taking centre stage for some of the best festivals in Europe. From the highly popular music festivals such as Longitude and the Forbidden Fruit festival to the cultural celebrations of the James Joyce ‘’Bloomsday festival’’ Dublin will be a swell of activity in 2016. New on the scene this year is the Raveloid festival taking place in the beautiful Ardgillan Castle in North county Dublin, less than 30km from the city centre.

Check out our blog ”Dublin Festivals in 2016” on the best festivals coming our way this year.Its sure to be an action packed year all over the country with Electric Picnic and Body+Soul festival happening not too far from Dublin but we’re sure you festival lovers will have more than enough selection here in the capital.

Fair enough, it isn’t a 2016 only event as it happens every year, but the six nations rugby is always a good reason to visit Dublin to witness the unique atmosphere

of an Irish home fixture where the passion from players and fans alike is unrivalled.

While we’re being perfectly open and honest I would be more of a football fan myself but I can honestly say some of the best weekends have been mixing with the rugby fans from the opposing 5 nations (yeah even the English) as they spend a weekend in Dublin while supporting their team. Also this year Ireland will be going for a first ever three in a row so the celebrations when that happens will be quite wonderful.

Another great reason to come to Dublin in 2016, inspired by the 1916 proclamation, Imagining home is a series of seven concerts that will take place from Monday the 28th of March until the 3rd of April, which will surely make a significant impact to the already huge commemorations planned for the anniversary of the Easter Rising.

Heather Humphreys T.D. Minister for Arts, Heritage and the Gaeltacht said:“The seven concerts which will be staged consecutively at the National Concert Hall over Easter Week next year will reflect on the ideals which inspired the 1916 Leaders and how they impacted on Ireland’s interaction with the world, on our literature and on contemporary and traditional music. The Concert Hall, as one of our National Cultural Institutions, will be a focal point for the commemorations, and will help us to explore our past and look to the future through music, song and debate.”

What better way is there to mark the rising by embracing our musical culture in one of our treasured venues.

One of our main attractions  Kilmainham Gaol (Jail) has recently undergone renovations. Millions of euro was spent and we are delighted that it is now fully refurbished .The experience which was already a massive hit with tourists has now been significantly enhanced, leaving less chance of being  disappointed. Kilmainham Gaol is one of the largest unpopulated prisons in Europe, and was where many of the protagonists in the Easter Rising were executed 100 years ago. It is a fascinating site to visit and the price is only €4 for adults and €2 for students.

This is just one of our amazing heritage sites including Phoenix Park, Christchurch Cathedral, St Patrick’s Cathedral and Merrion Square.

When you’ve seen all there is to see in the city, enjoy a nice morning, afternoon or full day trip to one of the beautiful, picturesque locations along Dublin Bay. From Howth head, Dublin’s most northernly point, to Dalkey in the south, you can enjoy the beaches, towns and villages along the way. As a north side Dubliner, I am a partially biased towards places like Malahide and Howth. You can use our close proximity here in Isaacs to Connolly rail station to catch a train to either or these places. It takes only 20 minutes so there is no need to plan an early start and you can decide as you go if you want to do a full day or just a few hours at the location.

Witness Malahide’s medieval buildings, none more beautiful than Malahide Castle, which dates back to the 12th century where you can take in a tour or just explore the castle and demesne at your leisure. You can also take in the extraordinary sea views and visit the wide variety of pubs and restaurants, Gibney’s of Malahide being a personal favourite of mine. You can also take the Malahide coastal tour with Grayline tours.

Howth village is easily one of my favourite places to visit, especially when I have friends visiting from overseas. The raw beauty and picturesque scenery in this fishing village is to be seen to be believed. You can spend hours just walking around and taking in some of natures most beautiful elements. During the summer, take a walk along the pier (there are  even seals playing in the water) and watch the sun go down late in the evening when the crowds have started to depart. Hike along the cliffs, do some fishing, or explore the boats moored along the shore. Don’t forget to try out some of the best fish and chips there is in one of the local chippers. Grab a coffee and some lunch (a lot healthier than fish and chips) in one of my favourite haunts, the Grind Coffee House.

5 hidden gems in the heart of Dublin