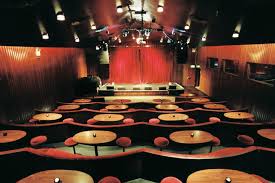 There is nothing better than hearing live music you know and love in a city you’ve never been in before. Dublin is a city full of live music and pretty much any place with taps and a bartender could be considered as a viable music venue. If you’re looking for a live music venue with a little more to offer than off-key singer/songwriters and cringe-worthy karaoke sessions, these top 5 five live music venues in Dublin are for you

This place looks great and with its old-fashioned theatre vibe, it’s perfect for everything including music, movie screenings and DJ sets. There are a whole host of movie screenings, DJ sets and live music from now until the end of Summer

What this place lacks in size it more than makes up for in variety. You can usually tell what day of the week it is by what music is being pumped out into the cobbled streets of Temple Bar. I would usually advise people to steer clear of drinking in Temple Bar, this and The Old Storehouse are the two exceptions to my rule. The Mezz won’t have as prestigious names performing as some of these other venues but seven days a week they will have a selection of bands playing each night that span all genres. Keep an eye out for the face-meltingly talented “Soul Power”who are to cover bands what James Brown was to funk. I also feel it’s worth mentioning that the soulful sounding splits pulling frontman of the band is, in fact, a mathematician, go figure

Whelan’s off Camden is a little bit of marvel. From outside you wouldn’t imagine anything more than a small atmospheric snug but this place never seems to end. It has seating areas with their own fireplaces, a massive dance floor equipped with a Dj in the back, an upstairs open-air smoking area and finally the intimate little area where most of their live music is held.

There isn’t much on in Vicar St in the next month or so for whatever reason, there isn’t a single event scheduled for the month of July but Dara O’Brien will be playing us out till the end of June. If you are a fan of comedy then this man is a must see, he usually performs most of his shows in England so this is a nice opportunity to catch him on his home turf

Olympia has functioned as a venue for just about everything since 1835. This is one of the most loved theatres and venues in Dublin. The majority of people living in this city, young and old have seen at least one performance they will never forget in this prestigious theatre. For me, I’ll never forget seeing one of my all-time heroes James Brown being led off the stage only to jump back up continue making my day. If you want to make memories for yourself of the Olympia there are plenty of opportunities coming up.

What to do in Dublin in September ?

Halloween in Dublin at Isaacs Hostel

August 5, 2015 No Comments
PrevPrevious3 slightly mad things to do in Dublin
NextDublin for FreeNext