Isaacs goes to The Cliffs of Moher – A Drunkard’s tale ! 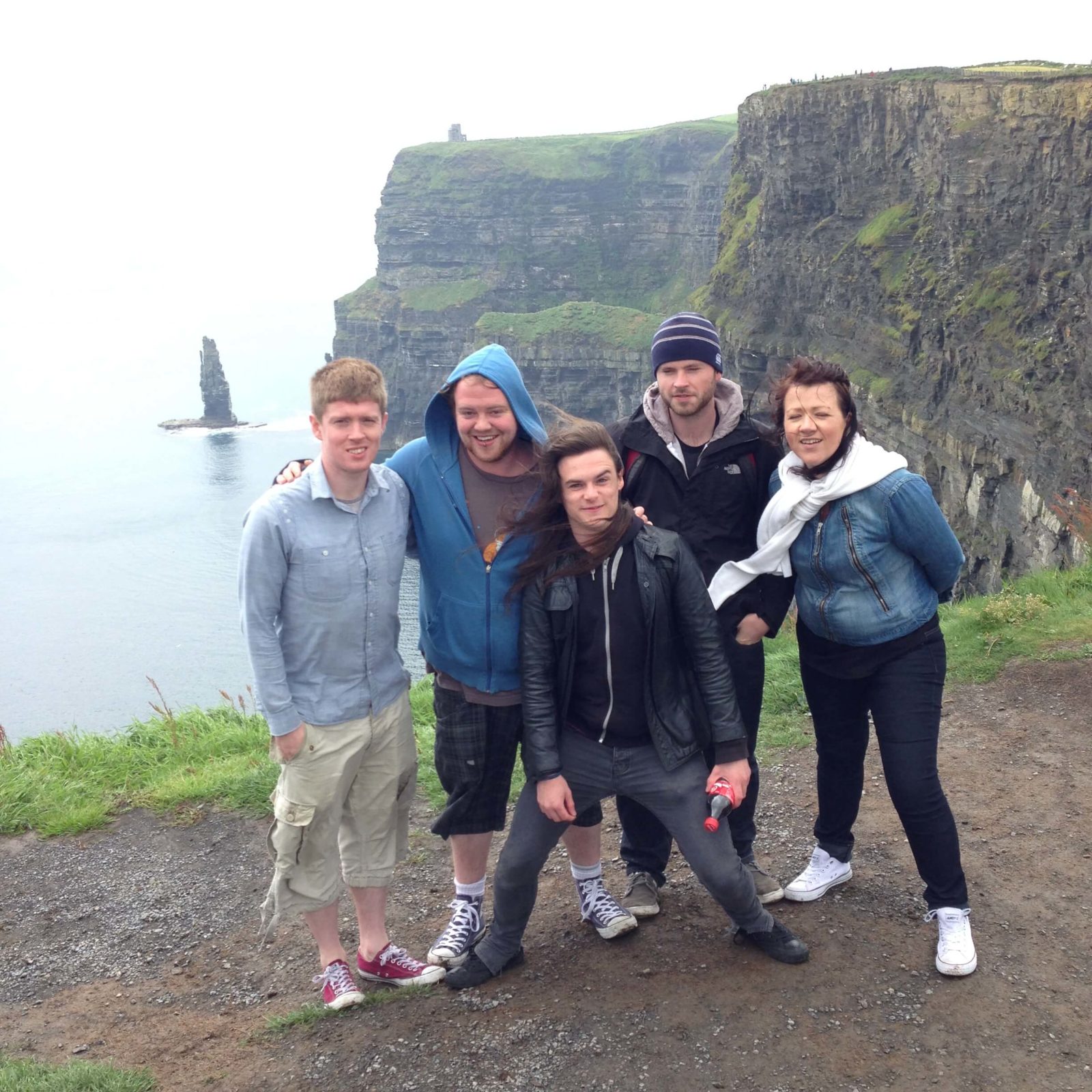 Five go west to the CliffsÂ of Moher …

This is the tale of three members of the staff, one ex member of staff, and the manager of the walking/pub crawl, as they embarked upon a journey to experience Ireland. Along the way, there would be drink, amusement arcades, drink, food, drink, music, drink and the Cliffs of Moher. It was a journey that not one of them would forget â€“ despite consuming enough alcohol between them to tranquilize two elephants, a hippo and seven small lemurs. This was Andyâ€™s birthday.

Â Our story begins at 6.50am one Wednesday morning when the five of us met on Lower Gardiner Street in order to board a bus. Wild Rover Tours â€“ arguably the best tour company in Dublin â€“ had arranged something special for us as we boarded: a gift basket for the now older Andy. The goodies inside served to kick off what would be a rather raucous jaunt. Our plan was to go to Lahinch, a beautiful surfing village on the coast of County Clare, and spend the night there. The next day, we would be picked up and brought to the Cliffs of Moher, through the Burren and onwards to Galway, before coming back to Dublin.

Â We arrived in Lahinch at around 11.15am.Â  â€œTime to explore,â€ said one of the hopeful ones of our group.Fifteen minutes later, we were sitting on a balcony overlooking the beach, with three pints of Guinness, one Smithwicks and one Jameson. Exploration is what you make of it.

Â Sitting on the beachfront, the five of us chatted about what exactly the day had in store for us. However, rather than joining in the conversation, my eyes were constantly drawn to an amusement arcade. After two hours, I could stand it no longer and, with Ray (walking/pub crawl manager) in tow, burst into the small arcade. There, I dominated Mario Kart whilst Ray kept beating those machines where you drop a 20 cent coin in to try and push other 20 cent coins off the ledge. We floated from machine to machine, beating Whack-a-Mole, winning teddy bears in claw machines, losing at Texas Holdâ€™Em and trying to fit into a car made for a 5 year old. By the time the other three had joined us, it was time to check into our hostel.

Â Lahinch Hostel is a small, unassuming place â€“ the type of place that you could feel would have a real energy in high season. It was quiet when we arrived, but we were determined to make the most of it. Whilst the birthday boy, Ray and my colleague, Martina, had a snooze, Ronan â€“ ex staff â€“ and I bought a bottle of the good stuff and indulged ourselves for a couple of hours. It was then that all important time â€“ World Cup and alcohol.

Â We settled down for the first half, buying rounds of drink, talking and laughing during the dull parts of a rather lacklustre first half. We went to a different bar then in order to eat during the second half. Ray disappeared after our filling meal and re-appeared with scratch cards. The next half hour is a blur. All I remember are repeated trips to the shop as our tally of 5 scratch cards rose and fell until we were at nothing. Doesnâ€™t sound like fun? You werenâ€™t there. It was stupidly fun. The drink helps.

Â Now that we were all fed, it was time to move on. In the pouring rain, we looked down the one street that Lahinch had to offer. Then we careened down in like a hurricane, tearing through every bar, leaving nothing but empty glasses in our wake. As the evening wore into night, it was time to find some music. Ray and Ronan, both accomplished musicians, were itching for the chance to belt out a few songs, and we were all looking forward to it. We found a bar that had some wonderful live music, and Ray joined them on stage, playing the whistles with a skill that is unrivalled on all four coasts. We then all took our seats and began a singing session that Iâ€™m sure they still talk about in Lahinch â€“ such was its power.

Â When the bars were all closed, we had no other choice than to retire to bed. Although we didnâ€™t do that. Instead, we grabbed all the drink we had bought earlier and the five of us went down to the beach. We all took seats, perched upon stone that jutted out from the beach. It was pitch black, it was windy, the tide was coming in, crashing over the rocks. With a bottle in each hand and a whiskey in my own, the singing began. For three solid hours, we sang to the Atlantic and watched it dance. We were drunk, we were happy, we were at ease. It was truly a great night.

Â Dawn comes with rosy fingers, and the five of us somehow made it on time to be picked up and brought to the Cliffs of Moher by the wonderful people at Wild Rover. For those of you who have never been to the Cliffs, there are no words I can write here that can describe the feeling or the sight. Your stomach will plummet in sheer awe, your breath will catch in your throat. Itâ€™s like staring into the sky on the clearest night, when stars fill your vision and you realise how vast the universe is â€“ you feel small and insignificant. Thatâ€™s what the cliffs are like. You feel like a tiny ant in the Sahara, scurrying around to try to find your place. They are so vast and beautiful that you canâ€™t help but feel overwhelmed.

Â We wandered around the south end of the cliffs, daring each other to look down, gripping onto the safety fences â€“ when theyâ€™re there! â€“ and taking photos. Weâ€™ve all been there before, but itâ€™s always an experience, and one that everybody should have.

Â After two hours there, we went onwards to the Burren, an expansive stone forest. It doesnâ€™t make much sense unless youâ€™ve been there â€“ that a national park made almost entirely out of rock can be incredible. However, the Burren is truly one of those things that needs to be seen to be believed. We clambered up rocky slopes and took in the view. That this area is significant to Irish history â€“ particularly the Famine â€“ added something more to the experience. It was magnificent.

Â It was then onwards to Galway City â€“ a place that the five of us are all too familiar with. We quickly headed straight towards one of our favourite bars and got some dinner. None of us drank here though â€“ this was the time to talk amongst ourselves and reflect over the last 36 hours. Wow. Hard to believe that was only 36 hours â€“ it felt like a month.

Â We boarded the bus again and headed back to Dublin. The five of us were exhausted, but elated. It had been a fantastic trip. One that none of us would forget. But it was now time for quiet reflection, to let our bodies recover slowly, and to maybe catch a few moments of sleep. That is, until the inevitable question was posited: