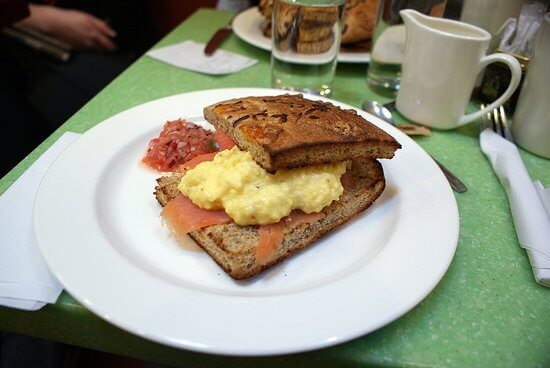 In the making of this blog I have come to learn many things, the main one being that you can go from one jean size to another quite quickly. Another being that food critics have the best jobs, and most importantly that there are a lot of fantastic places for cheap lunch in Dublin popping up under our noses.

Defining cheap can obviously be difficult as many of our guests will be coming from all over the world. Most of the recommendations below, are places we would suggest for a great lunch, so we would be looking to spend no more than €10.

w location is situated within a 5 minute walk of the hostel. It’s kind of off the beaten track. Most people will suggest eateries and fine dining on the south of the river, the north side being somewhat over looked. Although this new trendy establishment is not located in one of the prettiest locations, it has lots of character and possibly the finest, most original lunch menu in Dublin, and all for very reasonable prices.

With their own original soups and sandwiches, and hipster vibe, 147 has become one of the most popular and slickest spots in the city. Fresh, tasty and delicious sandwiches with fabulous selection. They also make sandwiches to order. They do an awesome meatball marinara sandwich and my personal favourite, the crispy pork is like Christmas in a sandwich, presuming you like Christmas that is. We’re also quite fond of a nice soup in Dublin and the guys at 147 have a fantastic selection available.

blin seems to have an awful habit (to quickly interpret my Dublin lingo, an awful habit can range from 40 cigarettes a day to having a habit of doing charity work on your lunch break, so yeah don’t take the awful part literally) of having the coolest pub or in this case an independent café pop up where you would not expect it to.

Brother Hubbard’s is a 10 minute walk from Isaacs, situated on Capel street (another north side entry) amidst an iconic pub, charity shops, fruit markets and a couple of sex shops. We’ll just ignore the last part of that sentence shall we!

The first sense you get as a Dubliner going in the door is how cool and modern this place is, kind of felt like you were in New York or Paris. A good indication you are in a nice place is the sign of very few empty tables. Anytime we have been in here it’s busy. I ordered a coffee as I browsed the menu and was already beginning to realise the reason for the queues coming in the door, the coffee was one of the best I’ve had in a while.

Again, like 147 Deli, the menu had a refreshing look to it with some quite unique options. I went for ‘’the best sandwich in Dublin’’ as voted for by people who sounded like they knew what they were talking about, which was the pulled pork sandwich. Granted, the pulled pork phenomenon has taking unprecedented leaps, but it can definitely be justified here. I was full to the brim afterwards so had to decline the desserts which looked incredible. I got change from my €10 and left a very happy man.

An extremely popular place, with a lot of Dublin’s busy shopping areas, banks and business places nearby. The first thing that made Honest to Goodness standout was the cool menu that we were given, where you just fill out what you want. Quite unique and trendy. We did have to wait a few minutes but we were there at the busiest period of the day.

For its popularity I was pleasantly surprised that we could order the specials for just €5. The Sloppy Joe I believe it was called, which comprises of spicy minced beef, a slice of tomato and a slice of cheese and mayonnaise sandwiched between two slices of homemade bread. They also do made to order sandwiches, soups and salads that all equally looked amazing as I rubber necked as the neighbouring customers tucked into their meal as I waited hungrily.

Honest to Goodness is just a two minute walk from Grafton Street so we would suggest visiting here after a hard morning of sight-seeing and shopping, although try beat the lunch time crowd so you can get a seat. They do have an upstairs though so don’t be put off by the crowds as you walk through the door for the first time.

What’s on in May in Dublin

My perfect day in Dublin

5 hidden gems in the heart of Dublin